(a) A maximum of 12 players per team. Shirts must preferably be numbered one (1) to twelve (12) and must not be interchangeable. The goal keeper must wear a distinguishing shirt.

(b) Games to be played using a nine (9) v nine (9) formation. Each team may have 9 players on the field and up to 3 interchange players in the technical area, totalling a maximum of twelve (12) players involved in the match for each team.

5.12.4 Teams shall assemble on the ground side lines at least five (5) minutes prior to the scheduled starting time.

(b) Semi Finals and the Final shall be twenty five (25) minutes per half with a five (5) minute half time break.

(a) Each team may make unlimited interchanges during a game.

(b) Interchanges shall take place on the sideline at the interchange zone or the closest edge of the playing field to the player being replaced at any stoppage in play after the referees permission has been obtained.

(c) All teams should play each of their players for part of each match, unless they are incapacitated or suspended.

(d) All teams allowed to have one (1) tactical stoppage for interchanges in the last 5 minutes. Injuries being the exception.

5.12.7 In all matches the referee shall be the sole timekeeper.

5.12.8 The 12 Years & Under competition is played under FIFA Laws of the Game with modified rules to assist players in their development.

(a) Corner kicks shall be taken from the specified corner arc marked on the modified pitch.

(b) The pitch size should be 70 metres (length) x 50 metres (width). The playing area should be set- up in an orientation of penalty box to penalty box, if within an existing pitch. *see illustration below. The orientation of the pitch is from ’18 yard box to 18 yard box’ on a full sized pitch. The championship is not to be played from ‘sideline to sideline’ or across a full sized pitch. 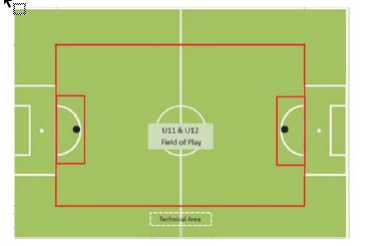 (c) Field markings are required and painted lines for pitch markings must be a different colour to any existing line markings used for other pitches. Field markings should not consist of cones or markers.

(d) Offside line to be marked with single cones on either side of the pitch at the halfway point of each half. Offside is not judged as per the halfway line as per 11 v 11 player laws.

(e) Goal size dimensions are 5 metres in width and 2 metres in height. Permanent or portable goals must be compliant with the Australian Competition and Consumer Commission’s Consumer Notice No.28 of 2010.

(f) The goalmouth dimensions have a depth of 10 metres and width of 20 metres. The Penalty Spot is positioned 8 metres from goal line. The "goalmouth" is the area defined and marked for the goalkeeper in which they can handle the ball.

(g) Goalkeeper: To restart play after a save or gathering the ball with their hands, the ball must be thrown or rolled from the hands or played from the ground with their feet, within 6 seconds. The goalkeeper is not allowed to kick or dropkick the ball from their hands.

(h) Goal kick: Goal kicks can be taken from anywhere within the penalty area.

(i) Corner kick & Free kick: Opponents must be at least 5 metres away from the ball until it is in play. The ball is in play when it is kicked and moves.

(a) In the case of a tied position in pool placings, positions shall be determined by:

(iv) Highest number of corners for

(b) In games to determine final placings, positions will be determined by, in order

(v) Highest number of goals scored for in pool games.

(a) In the case of a drawn semi-final, then five (5) minutes each way extra time shall be played.

(b) If the score is still tied the team with the least number of corners awarded against them (during the whole match including extra time) will be awarded the match.

(c) After extra time when corners are equal the winner will be that team which was placed higher in their pool at the conclusion of the round robin matches.

If, at the end of normal time, the final is a draw on goals, then the two (2) teams shall be declared joint winners. To determine placings for pools, refer to section 5.12.9.

Must be lodged, in writing, by the Team Manager (who must be a teacher), to the Championship Manager within fifteen (15) minutes of the conclusion of the match.

A Protest Committee consisting of the Championship Manager and two (2) people elected at the Managers' Pre Championship Meeting will hear all protests.

The Selection Committee shall consist of the State Coach and two (2) Association Managers elected at the Managers' Pre Championship Meeting.

In the spirit of the game of football and in the best interests of the players in the less competitive teams – when working out the for-and-against goal differences to decide pool positions, teams may only be awarded a maximum of a plus-six goal difference for any individual game.

Back to table of contents